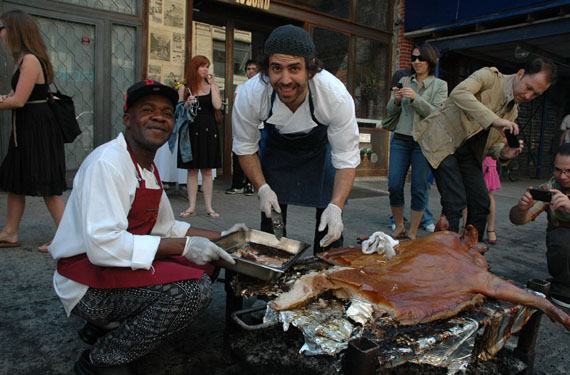 The event, an outdoor pig and apple festival marks the Autumnal Equinox (when day and night are of equal length).

The celebration will take place outside il Buco on Bond Street between Lafayette and Bowery from 1:00 - 8:00pm. Chef Ignacio Mattos and staff will rise before the sun and start a bonfire on Bond Street, where they will slow-roast a 200 pound heritage breed Crossabaw Pig.

Cooked on an infiernillo (literally "little inferno" but more commonly known as "little hell"), the pig slowly roasts between two large iron griddles with an intense wood fire above and below, a method developed by Chef Mattos' South American Mentor, Chef Francis Mallmann.

Throughout the night, Chef Mattos will tend to the flames while encountering late-night passersby for an incredibly fun New York night.

Starting at 1pm, friends and family alike will line up early for a convivial feast of all things pig.

Tickets will be available on-site for $20 per plate. Red and white Wine, Prosecco, Lambrusco, and Wolffer Estates Apple Wine will be $10 per beverage. Beer will be $8.

il Buco works extensively with the Crossabaw Pig, a special hybrid of the a rare breed Ossabaw, a pig from Georgia's coast on Ossabaw Island. The Ossabaw, left by the Spaniards more than a century ago, is a direct descendant of the "Pata Negra", or black-footed pig so treasured for its flavorful meat.

These Ossabaw pigs are raised in the open woods in North Carolina, on a diet of acorns and peanuts, both extremely high in oleic acid, the same fats that make olive oil so healthy. So pig is, indeed, good for you!

As Executive Chef of il Buco, a beloved NYC establishment that has been open for 15 years, Ignacio has had the honor of cooking at the James Beard Foundation, has taught cooking classes with the Institute of Culinary Education (ICE), the French Culinary Institute (FCI), DeGustibus and The New School and has participated in numerous food events in and around New York City.