A sunny day in the Seven Cities is a thing of beauty: water shimmering in the distance, budding trees swaying in the breeze, and a chance to slip off confining outerwear.

The shiny Sunday I arrived at 5 Points Community Farm Market for Sleepy Goat Farm’s Cheese workshop was the first sunny day we’d had in over a week.  Virginians take fine weather seriously; only one other attendee showed.  More time with the goat people and their artisan cheeses for us, I said.

The goat folk are Della Williams and Jon Dorman, both board-certified neurologists, and cheesemakers. Dorman hosted the cheese-tasting with gentle wit and infinite patience for questions, while Williams, who possesses a pleasantly sharp sense of humor, fed us samples of Pesto Goat Cheese Cake and Eggplant Goat Cheese Sandwiches with Pomegranate Molasses.

The Pesto Goat Cheese Cake was a savory re-working of a sweet cheesecake recipe from the Joy of Cooking, substituting chevre for ricotta.  The delightful Eggplant Sandwiches were the perfect blend of savory and sweet; other recipes can be found here and in “What Do I Do With It?:  A few ideas about using goat cheese”, the Sleepy Goat Farm cookbook.

While she sautéed onions and coated eggplant slices with seasoned breadcrumbs, Williams shared some of Sleepy Goat Farm’s history. 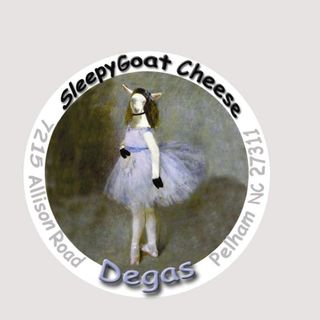 In 1989 they had converted an old tobacco farm in Pelham, NC into what eventually became Sleepy Goat Farm, a 164 acre home farmstead. That same year they obtained Ethel, the first goat on the farm, and a coddled pet.

Ethel, named for Dorman’s sister (who really did not see the humor in that honor), was so much a part of the family she spent much of her time visiting in the house, and napping by the pond with Williams.

Napping with goats?  Is that the story behind the Sleepy Goat name?  No.  Williams is a sleep doctor, as well as a neurologist; there used to be a sleep lab on the farm.  These are cheese-makers with a sense of humor.

In 2003, after a happy 10-year practice in Dubai, UAE, the doctors returned to the States and decided they wanted a change of pace.  They began building their happy herd of Oberhasli (Obie) milk goats.

Their certified cheese-making business began in 2004, when they obtained a farmstead cheese license from the state of NC and began selling their hand-tended cheeses at farmer’s markets in nearby Danville, VA, and Hillsborough, NC. Williams and Dorman, helped by four assistants, make several types of both raw milk and aged goat milk cheeses.

Most of the cheeses are named for Impressionist painters, rather than carrying the traditional French names of various goat cheeses. They said they really felt they could not duplicate the Tommes and Bourcherons of France here in America.

“The cheese takes on the character of the cheese-makers, the goat herd, and of the place,” Williams explained.

Their charming and clever labels are designed by Janel Gaddy of Danville, VA.

The first cheese I tasted at the workshop was Picasso, their chevre, a soft and wonderfully versatile cheese which can easily be mixed with different flavors.

“I tell people to think of chevre as they would olive oil, butter, or eggs in recipes,” Williams said.  The couple ask their customers to look at Picasso cheese as their canvas for artistic culinary expression.

The next cheese I sampled was one of their more popular varieties, a new cheese created because Williams wanted a cheese somewhere between the aged cheeses and the chevre.

The Rousseau, which is only sold during the milking season, is a milder, less salty cousin of feta.   Dorman offered up bites of Marinated Rousseau (recipe in Sleepy Goat Farm cookbook) from a jar filled with oil, herbs, and hot pepper.  Rousseau is a fine salad cheese; Williams likes it on rice cakes with fresh tomato, basil leaves and a drizzle of good olive oil.

Finally, I tasted the Degas, an aged, washed curd cheese originally made only in French monasteries (the Saint Paulin style); it had a rich, sharp flavor.  This was followed by the Cezanne, their version of a Tomme, an aged raw milk cheese with a firm texture and a mild, mellow flavor.

“You should always eat Degas first," Dorman advised. “If you eat Degas after Cezanne it will taste bitter.”  When asked why, the cheesemaker replied with a smile: “Cheese is strange.”

My verdict: strange and delicious.

The Sleepy Goat Farm Cheeses are sold at many Farmer’s Markets in VA and NC.  Retail outlets include Midtown Market and Fish Bones in Danville, VA and The Briar Patch in Winston-Salem, NC.

Plans for an online store at www.sleepygoatfarm.com are still in the works; look for it, possibly, this summer.  Until then, phone orders are available for shipping to VA, NC, and as far as NYC, for retail prices plus shipping and handling. 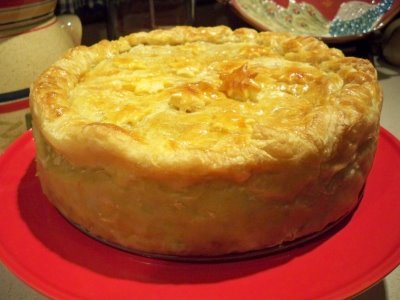 Here's some food for thought in case you have spare minutes away from being a fabulous Kitchen Goddess or God.

Culinary Types amazes with LEFTOVERS.  Organic roast leg of lamb is the hero of this story, the happy remains of a feast wrapped beautifully in puff pastry. Voila! Savory Lamb Pie.

Always wanted to know what to do with those exotic Asian ingredients?  Wonder no more.  Sunday Nite Dinner is the word. And what gorgeous photography. Fresh Bamboo with Pork anyone?

The Cupcake Queen is my American Idol.  Way More Than 52 Cupcakes has a Super birthday cupcake surprise fit for a legend.  Wish she would send me a few dozen of those babies for my birthday next month.

When in Singapore, eat where Gastronomic Ruminations eats - wiping a bit of drool with my sleeve here.  This week - rustic French Soul Food.  Where is my passport?  Reserve my seat at the table, please.