Mayan recipes from The Painted Fish

CARRBORO - When Sonja Lillvik unpacked her bags in the Yucatan peninsula, she planned only for a brief healing interlude. A lifetime later, she still lives and works on the magical Mexican Riviera Maya. 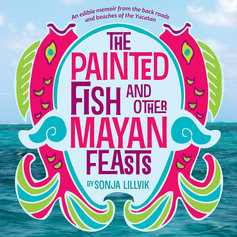 Her food-oriented memoir, "Painted Fish and Other Mayan Feasts," paints the colorful story of her happily  ever after through anecdotes, Mayan recipes and pictures. The title refers to a festive grilled fish dish, ticnchik, known for its deep, brick-red color derived from achiote, a spice paste made of ground annatto seeds, herbs and pepper.

Lillvik will sign copies of her book Friday from 6 to 8:30 p.m. at Johnny's in Carrboro, and Saturday at 2 p.m. at Flyleaf Books in Chapel Hill. She and former Flying Burrito owner Phil Campbell will demystify the crispy, sweet, edible root, jicama, a Mexican vegetable mainstay.

The 192-page book with 100 recipes - some based on recipes hundreds of years old - was more than 20 years in the making. It is a feast for foodies, armchair travelers and romantics who don't happen to live in the Yucatan yet would like to experience authentic, fresh Mayan cuisine.

Corn tortillas are as essential to Mayan culture as bread is to French or Italian. "Mayan mythology says man was made from corn," Lillvik said. "The corn tortilla is a pusher, a spoon, a plate. They're homemade and much healthier than flour tortillas."

But modern Mayan cuisine is more than the tortilla, with a range of tastes and textures drawing on tradition as well as influences from cultures as diverse as Spanish and Lebanese. Noted for its use of the high-heat habanero, the cuisine relies also on basic spice pastes - blue, red, and white - which are the basis of many Mayan dishes.

"I arrived in Mexico with a broken heart," recalled Lillvik. She escaped California and a series of devastating tragedies for a working vacation, managing the day-to-day operations of the Caribbean beach resort, Kai Lu'um.

Her entire kitchen staff were Mayan and spoke no English. A single waiter spoke Spanish, but no English. Lillvik spoke only English. What could have been a recipe for disaster was overcome through the medium of cooking. While learning to communicate without words, she also learned the art of flaming foods, carefully training a blue flame down the spiral peeling an orange.

Months later, she found she'd seen only the inside of a kitchen or dining room and very little of the serenely beautiful landscape around her. And she still spoke broken Spanish.

Deciding to linger a little longer, seeking spiritual guidance as well as scenery, Lillvik turned up in Punta Allen. Punta Allen is a lobster fishing village in the world biosphere reserve of Sian Ka'an, which in Mayan means "the land where the sky was born."

There she met a charming and attractive lobster fisherman, Armando Lopez, fell in love and started sharing his hammock as well as his simple lifestyle.

Once again, she found herself relying on food as a medium of expression, joining her new husband's friends and family in the kitchen to help during meal preparations. Here she learned the secrets of Mayan home cooking.

The couple ran Casa Cuzan, a guest house and fishing lodge embracing eco-tourism. "I didn't know anything about running a restaurant. We were lobster fishermen, so it was lobster for breakfast, lunch and dinner," she said of the early days running their rustic resort.

Rory Flood, her cousin and publicist, loves to tell the dream-like tale of Lillvik's sea change to those of us who yearn to sleep in hammocks, waking to an expanse of azure ocean and lovely days free from the constraints of clocks.

"It's splendid, truly a place that people want to go to," Flood said. "My cousin Sonja laughs more than anyone I know. She bubbles."

Lillvik always meant to write a cookbook. She'd originally started journal writing to relieve the solitude of her inability to speak the native language. Writing the cookbook was a way to reveal her passion for the Mayan kitchen.

But throughout the years of working with her husband to build their business, there never seemed to be time. She kept at it, dish by dish, a tidbit at a time, and when she was diagnosed with breast cancer about nine years ago, she determined to finish.

Donna Neilson, a chef and cookbook editor who worked with Lillvik through the years to adapt the Mayan recipes, remembered the early kitchen conditions at Casa Cuzan.

"I didn't have a mixer, but I had a blender. There was a stove but no oven. I shaped what I did to fit the situation," Neilson said. "This may sound corny but the main thing with cooking is a good knife and a whisk."