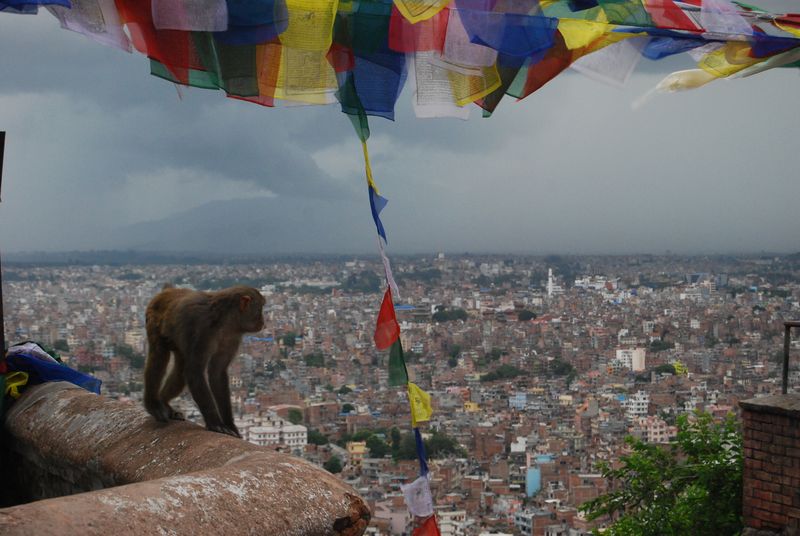 I realized today that it's been forever - and possibly a day - since I posted.  Mea  maxima culpa.

My absence, dear readers, by way of explanation, is this: I traveled to Nepal with my son in June, stayed for 10 days and arrived home again, home again with a nasty viral something or other which took roughly 3 weeks to cure.

And then I was extra sleepy.

After that I was distracted by romance. Ooh-la-la.

Finally, I couldn't think of anything pertinent to say.

At any rate, I'm officially returned.

My trip to Nepal was just before the rainy season, so we had some rain, but not torrents. Mornings were sunny and our day started early as the sun rose about 5 am.

Since we were still on US of A time, it was like getting up from a really long afternoon nap. I had cloudy head - a lot.

Days seemed super long to me, but I think that was because everything slowed down immensely.  The best part of everything being enormously slow was that I was well rested in spite of myself.

Even though we were visiting family, going out shopping and to do a little sightseeing, I still had hours and hours to relax, read, and sleep.

The last time I was in Kathmandu, my son was much younger and I was a sheltered bride - if you can imagine that.  What I mean to say is that as a married woman, I was accompanied everywhere by my in-laws or a member of the household.  For a very independent woman (and traveler), it was an interesting position to be in and a little stifling.

Now, I can appreciate the care my son's grandparents extended to me.  Though my son's father and I are no longer in a relationship, we have the bond of friendship and kinship, and they still like to fuss over me and, naturally, their grandson too.

This trip I spent more time on my own exploring on foot the neighborhood my son's grandparents live in, Balaju. We also walked to Swayambhu or the Monkey Temple, which sits at the peak of a very steep hill. Swayambhu is popularly called the Monkey Temple because frisky primates scamper about the complex grabbing up fruit and food offerings left by pilgrims. As a precaution, don't feed the monkeys. They're brutes when it comes to bananas or sweets.

Pilgrims take the 365-step climb, or stairway to heaven, to worship and send prayers heavenward via prayer wheels and constantly illuminated butter lamps. You can light your own butter lamp for 20 Nepalese rupees, roughly equivalent to 30 cents USD.  Cost to enter the temple complex is 200 Nepalese rupees, or about US$2.90, if you're not Hindu or Nepalese.

The stupa, a spiritual monument containing holy Buddhist relics, dates to the 5th century.  According to Nepali history, the Kathmandu Valley was covered in water and at the center of this lake  was a perfectly formed lotus whose heart was a brilliant flame. The Bodhisattva of wisdom, Manjusri, drained

the lake with a blow from his magical sword and the lotus ascended to the hilltop where it transformed into the great golden stupa whose wise, all-seeing eyes gaze sleepily in all directions.

The view from Swayambhu is stunning, even on a grey-purple, cloud filled day.  The stairs are not for sissies or the feeble.  It's an arduous climb and the stairway is daunting, a straight, vertiginous shot heavenward.

The air is heavy with the scent of aromatic dhoop or incense sticks blended from centuries old recipes and despite the crowds, there's a serene energy flowing through you and around you. Walking into an enclosed room, you're struck by the heat and light of thousands of brilliantly flaming butter lamps, thought to represent the illumination of wisdom.

One of the most popular destinations in Nepal, Swayambhu really shouldn't be missed. If anyone is interested in traveling to Nepal, I'd be happy to help plan your trip.

The joy of travel is discovery.

Looking for something different for your next travel adventure?  Explore Turkey's ancient culture and experience the artistry of centuries old crafts like silk rug-making.

Creating a silk carpet takes patience, years of practice and a good pair of scissors. Luckily for travel pro Mark Murphy he doesn’t have to make a carpet, he gets to observe the work, and enjoy the beautiful finished product.

Here's the dish: 9 steps to a smoother, easier Thanksgiving

I like my holidays to be both elaborate spectacles and simple to manifest.  How's that for being at odds with one's self?

Can a table groaning with elaborate dishes and dides ever be an easy task to accomplish?  Sure, why not?

Give your Thanksgiving Day and dinner the  Good Housekeeping Seal of Approval.

Susan Westmoreland, Food Director at the arbiter of American housekeeping,  gives Delish.com the skinny on 9 best ways to streamline and enjoy your holiday.  (via Delish.com)